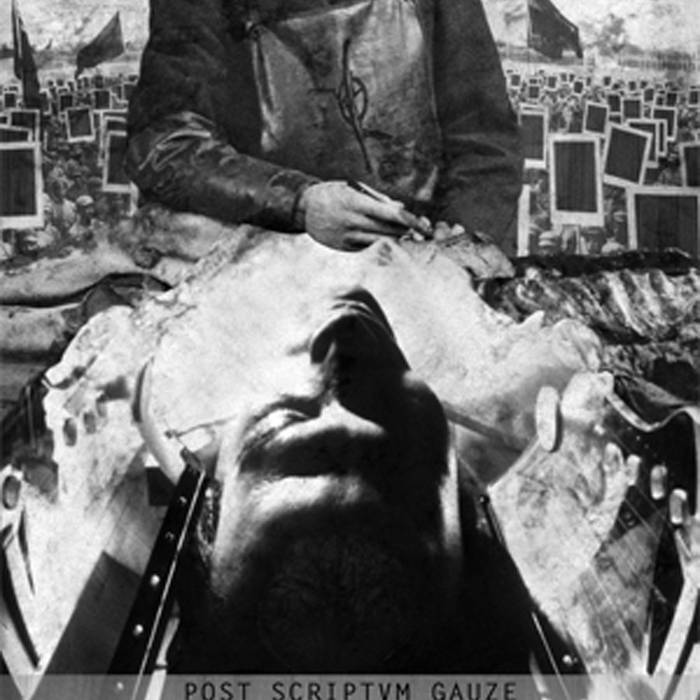 LP reissue of the first full-length album by Post Scriptvm, recorded in late 2001 and originally released as CD-r. Unlike the project's later works that are characterized by subtlety and meticulous production, Gauze is an unvarnished, gritty 4-track recording of lo-fi death ambient from the wasteland of southern Brooklyn, NYC, enshrouded in the lingering haze of razed buildings and burnt human remains. The boundary between what is considered normal everyday life and sheer insanity, carnage, personal and social collapse-true horrible face of humanity-is but an ephemeral layer of gauze that can be torn in a heartbeat, throwing reality out of balance, violently and irrevocably. "This game is prompted by a rip in the fabric of life." [Gauze] has the same hypnotic and overwhelming power as a strong fever dream. It hauls you into a contorted world of loose association, an industrial landscape in which humans lose their form and randomly merge with animals and bizarre machinery, where perception is warped and hours flicker by in an instant. -Nulll Oppressive drones and bleak atmospheres, interjected with twisted samples and cavernous, haunted basement noises. [Gauze] has a very cool old school feel to it that's been sadly missing within the 'death industrial' genre. -Jason Mantis/Malignant Records "Gauze" is a hazy swirl of dark ambient, subtle ritual elements, esoteric samples and mild death industrial textures. The deep tones and the cryptic vocals samples and chants combine to make some truly eerie atmospheres. -Scott Candey/Worm Gear "Gauze" sounds quite a bit like a live recording, like being immersed in a real-time psychosis simulation. -Industrial.org Post Scriptum construct their pieces from a varied mixture of drones, analogue sounds, post-industrial samples, strongly maintaining a claustrophobic atmosphere at the same time...thick with an uneasy sense of a catastrophe about to happen. -Corridor of Cells Ragged dark ambience full of trepidation and strangeness, as scratched into the flesh of weird, dimly lit corners of aural resonance. -SEVEN Tracklist: Cunctator Trepan On the brink Pore The Binding Vox Calamantis Gentle Diversions